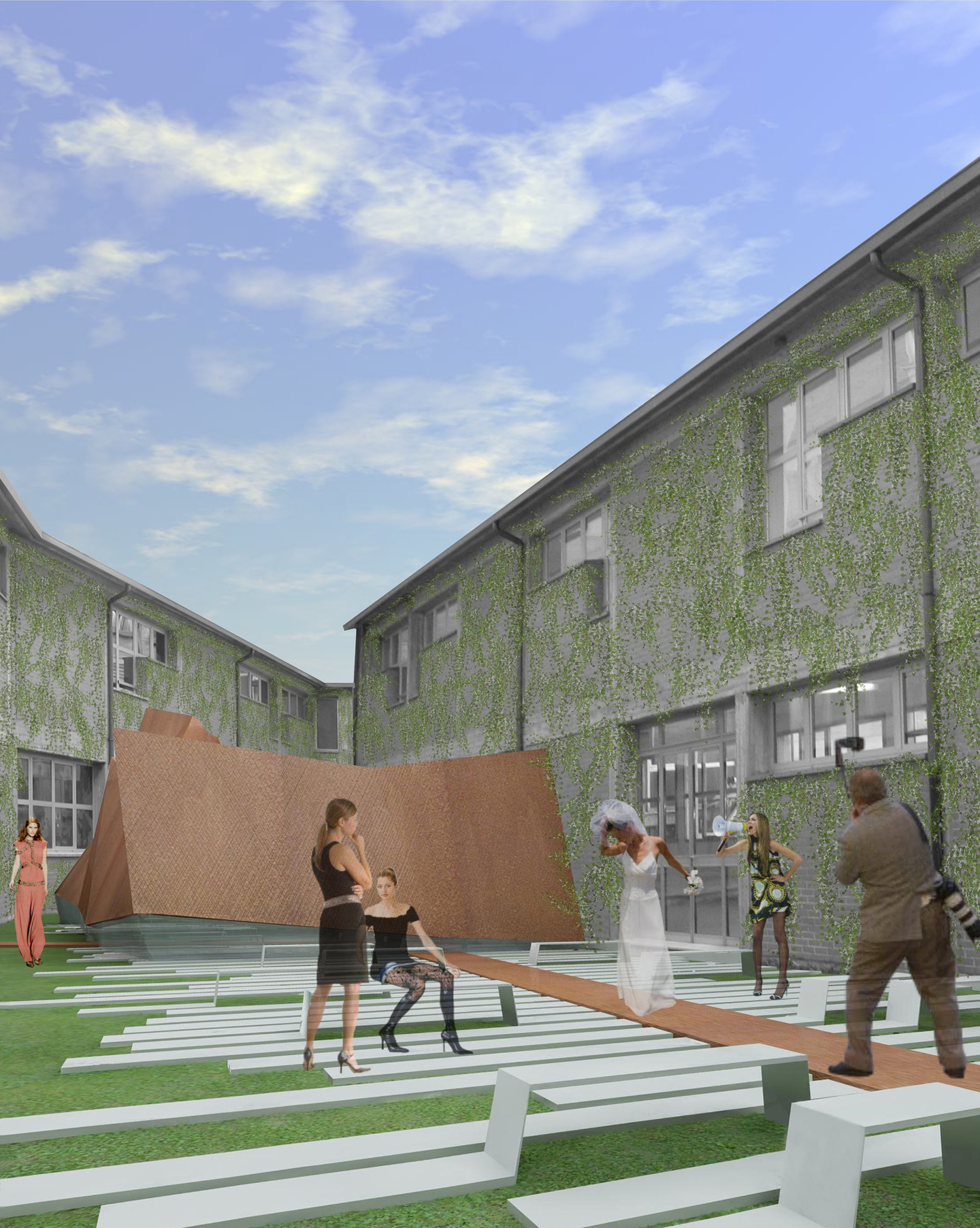 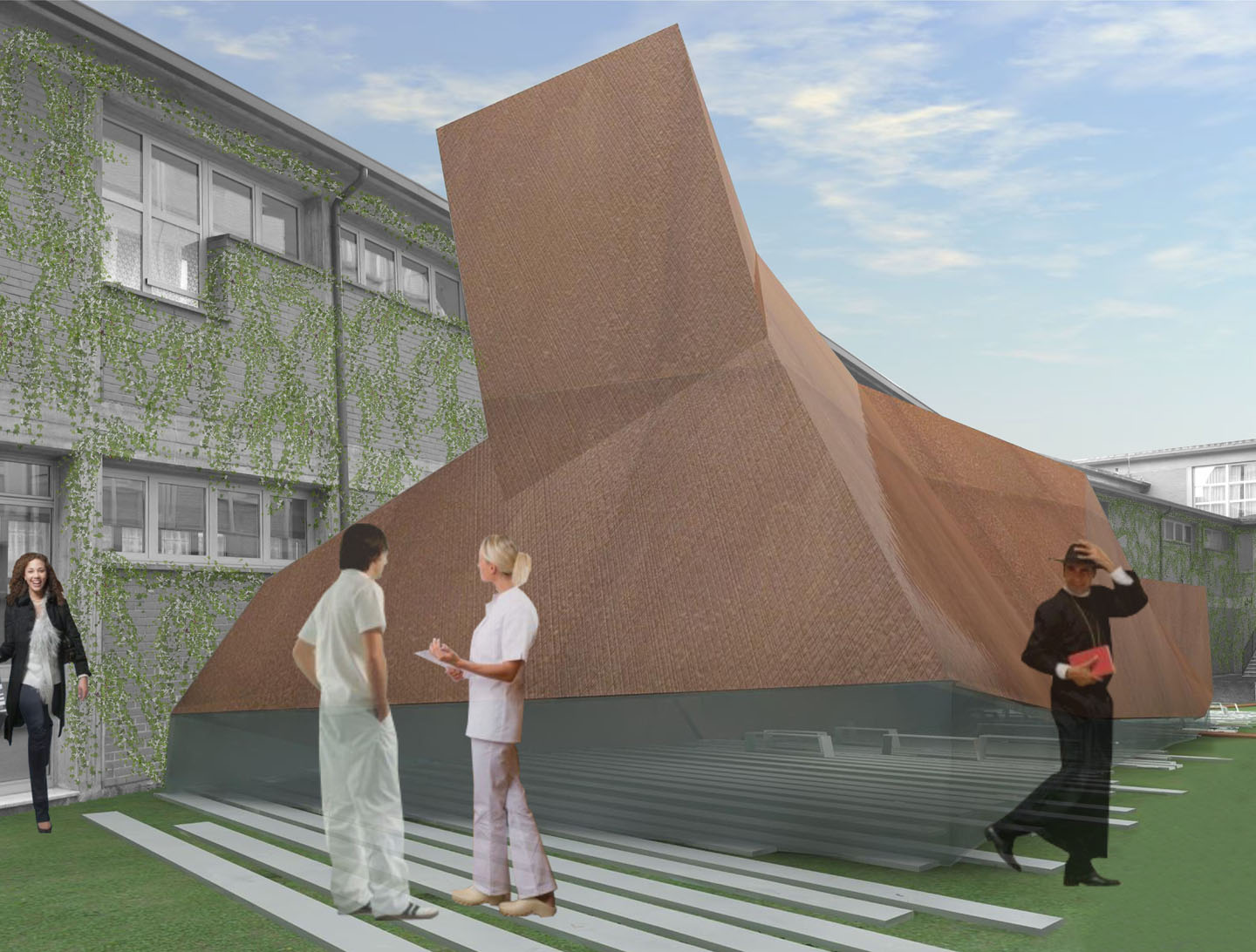 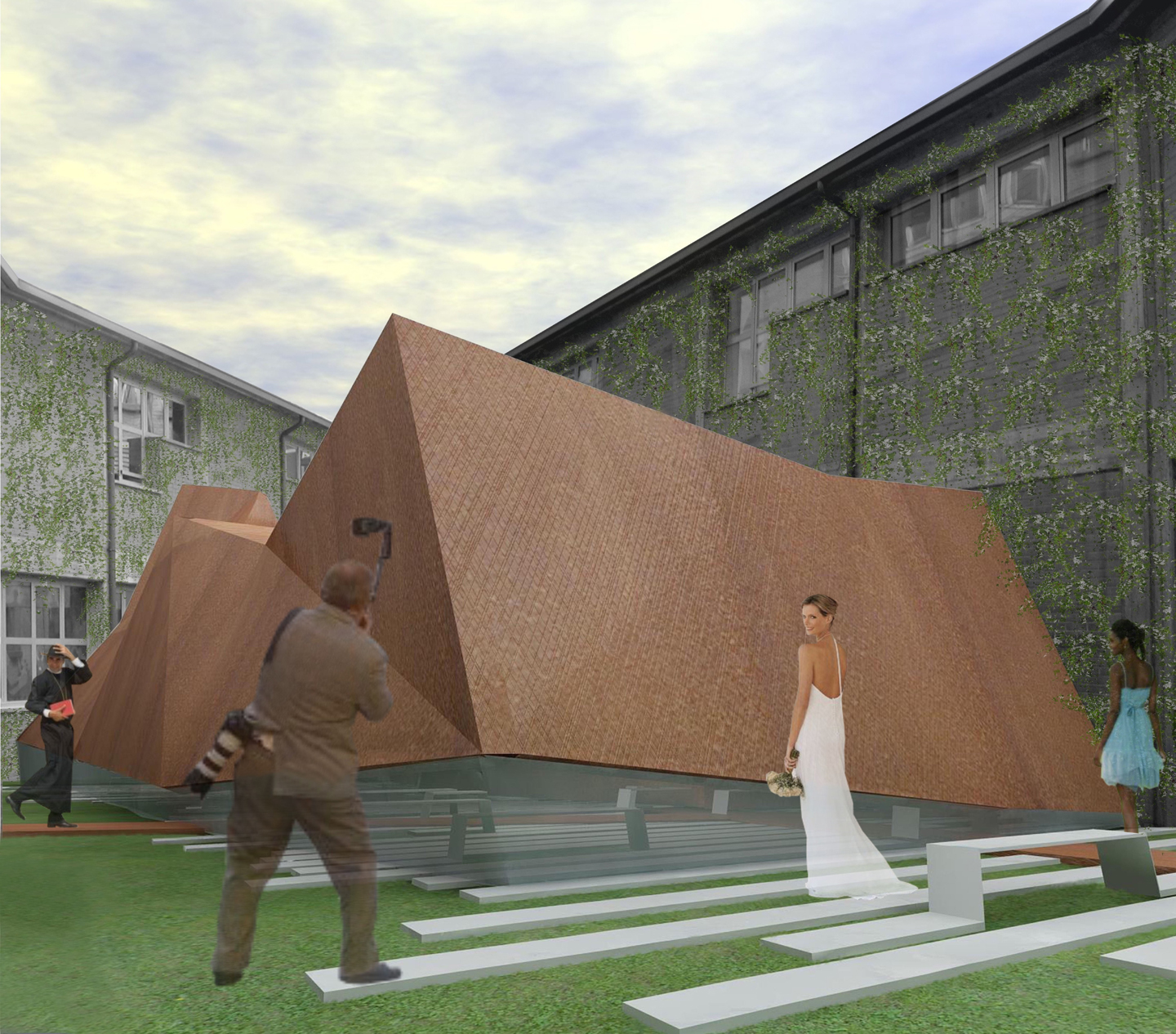 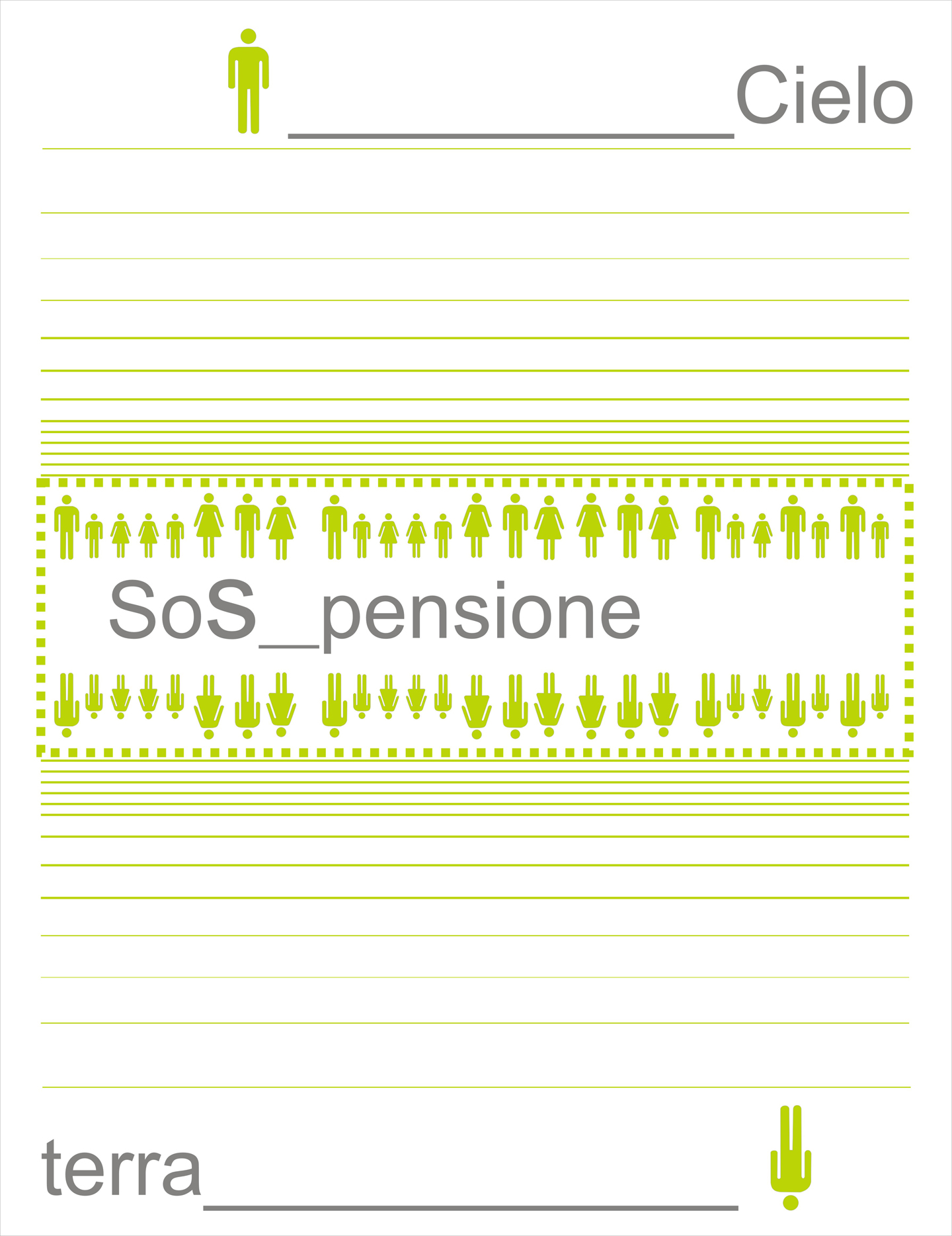 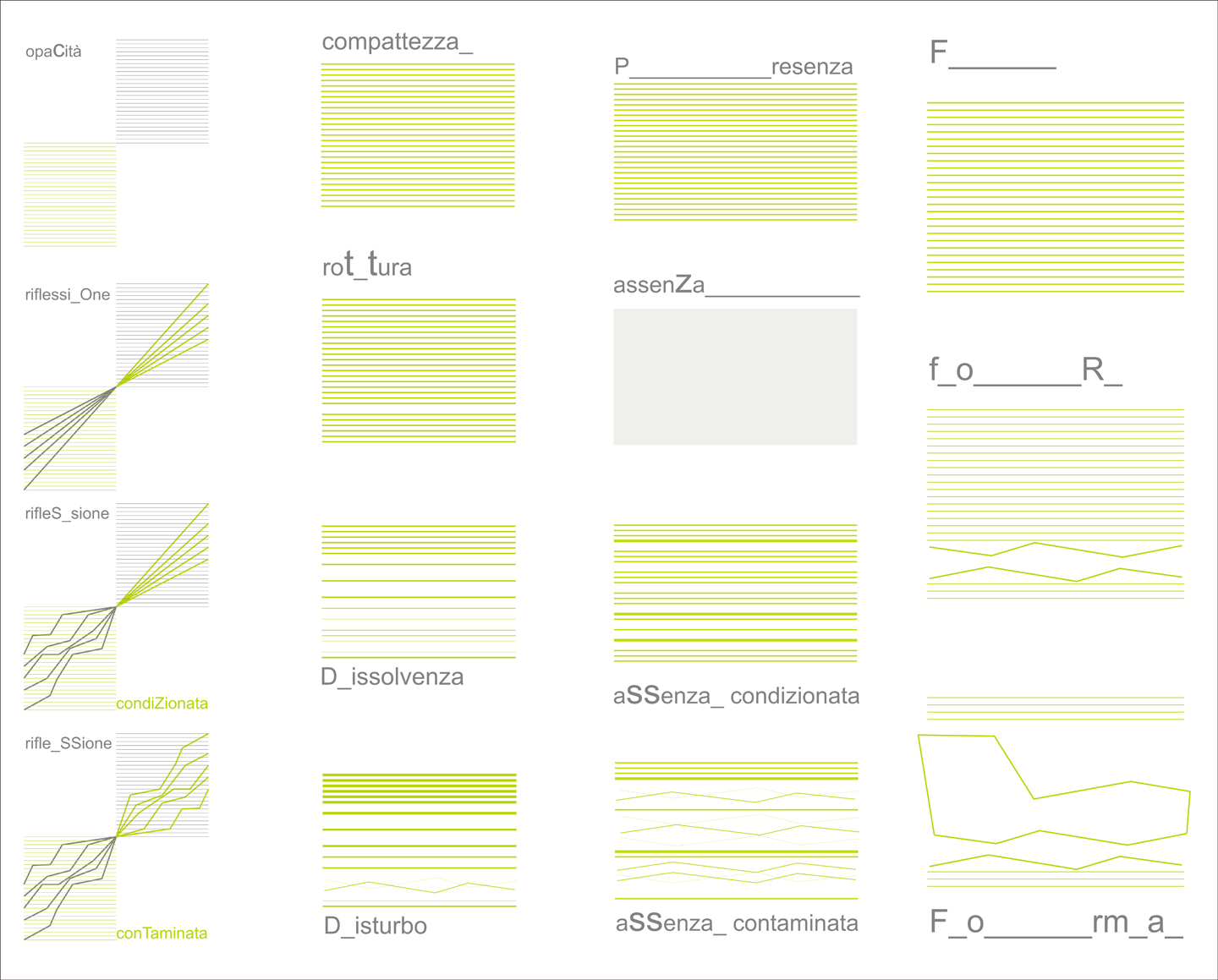 The proposal wants to inflict antagonism and provocation toward the simplicity of volumes and the formal appearance of a hospital. From the traditional static volumes of the structure comes out a formally dynamic, expressive and emotional mass. It wants to show up as an unexpected carving, mirage, illusion, dazzle.
It aims at triggering a signal of alienation_attraction inviting the devotee to the experience of distance_closeness to the holy path.
Everything assumes a fractal, ever changing dimension where facet and formal decomposition hint at the image of living rocks mentioned in the New Testament. It is made of a reflecting film which materializes as a veil tending to the disintegration of the closure.
It reverberates and reflects light beams and vibrant perceptions which inundate the context with energy.
The dignity of the work is based on its contradiction: the material full of essentialism triggers a feeling of annihilation of its real and concrete space. It becomes a media means between the physics and infinite mass, creating a conceptual difference between the narrative chronological time and the memory, contemplation time.
The structure develops from the ground up in the sky, lightly touching God. It breaks up with the material world, becomes lighter and free. The inner space is surrounded by clear light and it is full of spirituality.
A metaphysical halo, a suspended cloud which supports the awareness of the inaccessibility of the divine is materialized.
It is the escape, meditation, and prayer‘s area. It is the no possible place, where objects, characters and space are abolished. It is the main point of the whole composition.
The room, defined by shading contrasts, welcomes believers’ communities in a condition of a strong contact with the Holiness.
The room is cozy, intimate but also airy and particularly suitable for celebrating Sacraments.
It aims at being a peaceful and mystic environment not theatrical, but ordinary not prosaic.
It aims at being a place of gathering to go toward salvation.
All believers will build the structure with their presence.
The furniture: chairs, altar, ambo and tabernacle are distinguished by presence_absence. What remains is the celebration; the material is eliminated by light and transparency.
The furniture is characterized by mobility; it can be independent or dependent.
The difference between celebrant and praying persons has to be eliminated; as well as the traditional immobility. The room is like an event where many relationships are mantained.
The heart slows down, the head walks across that dark well of concrete ……………..